Pyrrha is quick to offer a friendly greeting or a word of encouragement. She conducts herself with patience, composure and modesty, taking her studies and training as seriously as her relationships. Her loyalty to her friends and dedication to ethics can make her stubborn and emotionally sensitive, especially when it comes to helping others or the greater good. She despises bullies and those who revel in closed-minded attitudes. Above all, she believes that if there is even the smallest chance of helping someone, it’s a chance worth taking.

She hasn’t had much experience with people outside a professional or academic environment, which sometimes makes it difficult for her to know how to react to certain situations. She can be a bit formal and tends to apologize to people even when she’s helping them. Her selfless nature and sense of duty can often work against her, causing her to neglect or outright sacrifice her own happiness if it means doing what is right or helping those she cares about.

Polarity: Pyrrha is able to generate and direct magnetic force as well as telekinetically control metal objects, even those which are not naturally magnetic. She can manipulate hundreds of objects separately and, with enough effort and concentration, lift as much as several dozen tons of metal. She rarely broadcasts this ability, however, especially in combat, preferring instead to shift things around just enough to make it seem like she’s invincible, thus giving her a psychological advantage on top of her skill and training.

Enhanced Physiology: Pyrrha’s strength, reflexes and endurance are all beyond the peak potential for a human of her size. With enough momentum she is capable of felling full grown trees with her shield. She can withstand a great deal of punishment and is quick enough with her sword to deflect bullets. She also heals from injuries faster than a normal human.

Miló and Akoúo̱ (Greek for “Speak” and “Listen”): Pyrrha owns a custom sword and shield, both forged by her own hand. The sword is a xiphos, or double-edged short sword, which can expand into a full length javelin usable in both ranged and melee combat. Her shield can be used offensively when thrown, and she is skilled at using it to ricochet off multiple targets and rebound back to her.

Pyrrha has trained since early childhood in a wide range of physical and martial activities and has consistently won championships in athletics, marksmanship, fencing, wrestling and weightlifting. In spite of her young age she is a favorite to qualify for the next Summer Olympics. She is a quick thinker in combat situations, aware of her own limitations and able to size up her opponents before choosing a course of action.

Pyrrha is a child and citizen of Latveria and was raised through a strong and enduring warrior tradition. All she knows of her father are from stories told by her mother, who claims he died before she was born.

It didn’t take long for Pyrrha’s athleticism to gain the notice of others, and she began competing in organized events from the moment she started school. She pursued every challenge with dedication and enthusiasm, and accepted every victory with grace and humility. By the time she was of age to enroll in Latveria’s most prestigious Academy, Sanctum, she was participating in international youth events, including those organized or sanctioned by the International Olympic Committee.

At one of these events Pyrrha’s age and abilities made her an instant media sensation, especially after one overzealous reporter dubbed her ‘The Invincible Girl.’ She was approached for endorsements, including a brief turn as the mascot of Pumpkin Pete’s Marshmallow Flakes Cereal, an experience she enjoyed, though she laments that the cereal isn’t very healthy. 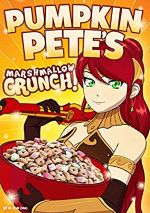 Her mutant powers manifested a year later while she was practicing swordplay. Her trainer managed to get their sword past her guard and a moment later it shifted, as if with a will of its own, to glance off her shield instead. Because of the rising mutant panic throughout the world, Pyrrha chose to keep her abilities a secret. She had always believed her destiny was to become a defender and champion and saw this as a sign. She dedicated herself to mastering her power as much as any of her other skills and talents.

She also committed herself to a study of the science of mutation, seeking out every credible publication on the subject she could get her hands on. When the horrors of Genosha came to light she began speaking publically on the matter of civil rights and the basic humanity of all mutants.

After graduating top of her class from Sanctum, Pyrrha was summoned to see Doom himself. He informed her that she had been selected to go on a goodwill tour to the United States, to give speeches and attend fundraisers as Latveria’s premiere athlete.

Unknown to Pyrrha, this is a ruse. Doom is fully aware of her mutant abilities, and knows that Latveria is not properly equipped to help her reach her highest potential. However, he knows there is a school, somewhere in New York, where she could find the instruction she needs. It would only be a matter of time before she got that school’s attention.

Community content is available under CC-BY-SA unless otherwise noted.
Advertisement